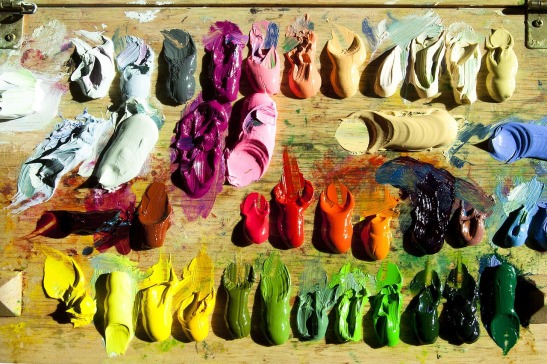 Smashing into the dorm room flinging the calendar and all its notes across the perfectly clean carpet, I threw my bags towards the desk and collapsed upon the floor in solemn discontent.

I lay there for a fortnight…actually  about an hour, but I had no music after five minutes because my phone died so it might as well have been that long. I could not bear the thought of getting  myself  up anytime soon, but I had a painting due, so I trudged, gripped a paintbrush and began plastering the canvas with emotions of a love deprived young adult.

You see, the bane of my existence at Arcadia, George Blight has dumped me…again. I know I’m more than he deserves but the sex isn’t half bad, and he is, at least, a seven. Nevertheless, he is a total prick, and I hate him. He told me that I’m crazy.

Though it does take crazy to know crazy. He is quite crazy I guess to think that I would care if he left me again. I didn’t care much for it the first time, I mean he is the one who literally came crawling back to me. And the only reason I accepted his groveling is because I hadn’t gotten any in almost a month, that’s insane.

The painting had turned into a darker version of The Lovers mixed with The Face of War, so I punched it. Smacked a tiny fist size hole straight through the man’s face. This would be what I turned into Miss Stacy, “ha, Stacy’s mom has got it going on!” Love that song.

Leaving the canvas there to dry, I stripped in the middle of the room as the last moments of daylight faded behind the trees. Nude, I stood for a moment gazing at the painting, the collar of the man had already dried. I applied some red lipstick which I’ve had forever and never used. Walking forward I tilted my head to the side sensually placing my lips on the crevice between his neck and collarbone, tasting the paint I removed them and started towards the shower.

Now beneath the water, I began to feel immune to my surroundings. I let out a breath closed my eyes and drifted off, letting the water’s embrace take me.

Michael Glenn, he’s just your average 18-year-old Clemente Community Academy senior from Chicago, Illinois. One of his favourite things to do is to write, which is something he wants to pursue in college and possibly make a career out of as well. So why does he write? Well asking a writer what compels them to write, is like asking a fish what compels them to swim. The only difference is fish can’t write why they swim. He writes because he can and because he must. It’s not just his hobby, it’s his passion.Writing can transcend the bounds of casual conversation. It’s a way to comprehend all the bad and good in the world. Tragedies to comedies, words can evoke the strongest emotions. Whoever said, “Sticks and stones may break my bones, but words can never hurt me,” obviously has never read The Great Gatsby by F. Scott Fitzgerald. If Michael’s pencil was ever too dull or pen was dry or keys were broken he’d surely go mad; yet, he would not fail to conjure a convincing and emotionally moving story. He absolutely loves being a writer.