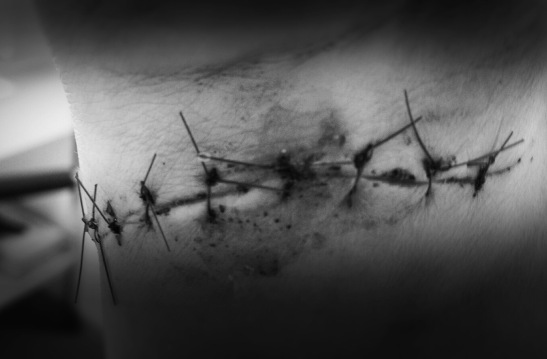 There was a little boy lying in the cucumber garden. He was naked, joints stitched with black sewing thread like a rag doll, and his bald head lolled to the side. As he smiled at Lottie, there was a chunk of cucumber wedged in between his yellow teeth.

Lottie stood above him, squinting in the bright sunlight, her hands on the hips of her blue pinafore. It would be tea-time soon, and she would have to return to the parlor, or Mother would start to worry.

“Hello,” he fumbled with the words as he looked up at her, eyes flat and dark as tar.

“I’m Lottie. I live here.” She pointed at the sprawling mansion in front of them.

“Do not!” Lottie yelled. “Do not, you stupid liar!” She kicked some dirt into his mouth and watched him sputter and cough, before running off.

When she reached the door she turned back to look and see if he was still there, but he was gone, leaving behind trampled flowers and fallen cucumbers.

At teatime she didn’t mention the boy to Mother, only sat and drank her tea, and didn’t even complain when it burned her tongue. She folded her napkin on her lap and didn’t let her elbows touch the table, and still, a praising smile never graced Mother’s lips. Her brow was furrowed as she continuously kept tucking strands of her dark hair behind her ear.

“What’s wrong, Mother?” Lottie asked as she shoveled some blueberry tart on her china plate.

Mother dabbed at her sweaty forehead with a handkerchief. “Nothing, darling. Do you mind if you finish up by yourself? I need to go attend to some business.”

Lottie agreed, because seeing Mother so angry made her very anxious, and Mother kissed her on the forehead with her cold, stiff lips.

Lottie resumed eating while kicking the family cat, Dolly. She would toss Dolly pieces of tart, and kick her in the ribs when she tried to eat it. After a while she grew bored and started aimlessly walking around the manor, dragging her sticky hands across the wallpaper, the wooden planks creaking under her bare toes.

When she was crossing the second floor foyer, she heard a noise. She looked up. The attic door was ajar. Carrying Dolly under one of her arms, she pushed open the door and started to climb up the narrow stairs.

The attic wasn’t somewhere she usually liked to play. It was dark and dusty, filled with broken toys and canned foods, old sweaters made by long lost relatives that Lottie would never wear, and animal skins from her father’s hunting escapades.

She coughed and waved away a cloud of dust, glancing around the sun-soaked room.The boy was sitting on a milk crate, his knees tucked under his chin. His grimy fingers were deep in a can of corn.

“But this is my home.” He gestured around at the attic, filled with stacks of old newspapers, mothballs and threadbare blankets. His wrists were covered in deep, bloody welts, the pale flesh of his skin torn to pieces. Lottie grimaced in disgust.

“What’s your name?” She took a step closer, and as she did, a wave of a sour stench hit her. Acrid and sharp, rotting flesh and rubbing alcohol.

“I have none,” he said simply.

Lottie laughed. “That’s just silly. You must have a name – everyone does!”

Lottie sat on the crate next to him, pinching her nose. “Where did you come from?”

“Here.” He picked up Dolly, who squirmed and hissed at him. “Pretty cat.”

“Don’t touch her, she’s mine.” Lottie tugged at Dolly. The boy’s grip grew tighter, and the cat yowled. “Let go of her!”

With a easy snap, Dolly hung limp in the boy’s hand. Tears sprung to Lottie’s eyes. “You stupid, stupid boy! Look what you’ve done now!” Wiping her cheeks, she grabbed the cat from him. “You stay away from here, and if I see you again, I’ll tell mother!”

“No,” he said, grabbing her arm. She recoiled at his touch, his grip harsh and stronger than one of a usual eight-year-old boy. His fingernails dug into her flesh, ragged and yellow. “You can’t let them know I’m here. Please, Lottie.”

Lottie didn’t know how this boy knew her name, and didn’t like it one bit. “Go away! I hate you!” She ran off, slamming the door behind her, cradling Dolly in her arms. Once she was back downstairs, she allowed herself to cry, blubbering and stroking the cat’s patchy gray fur.

When Mother and Father returned home, it was late, and Lottie was still sobbing. She hadn’t eaten supper, and this made her especially more sad, and her cheeks were streaked with tears. Mother wiped away her tears and asked what was wrong. Lottie told her everything, embellishing where she felt was necessary, her words garbled and weepy.

Mother gave her a tissue to wipe her tears, and she and Father went into the kitchen to fix her tea and toast. Lottie hid at the kitchen doorway, watching them talk in hushed voices as she ate her meal. Lottie couldn’t hear them but both looked angry. Mother’s lip was trembling. Father slammed his fist against the kitchen island, and Mother started to cry.

Their voices grew louder and louder until they were screaming, unintelligible words that Lottie couldn’t understand. “You built it, it’s your responsibility!” Mother poked her manicured finger into Father’s chest. “You told me, you told me you got rid of it!”

“Are you blaming me for this thing you created?”

“It was going to be perfect!” Her voice was raw, and she let out a final wail before Father slapped her across the face. Lottie coughed on a chunk of toast and Mother glanced over, blood trickling down her forehead. She sent her up to her bedroom to get washed up and in bed, her eyes wide and wild as a trapped animal.

When Mother came to tuck her into bed, Lottie asked her about what would happen to the boy. “Get some rest,” was all that Mother said.

“What’s going to happen?” Lottie asked. Mother just barely kissed Lottie on the forehead, her lips ghosting over Lottie’s skin, and flitted out the door.

Lottie didn’t fall asleep, dripping with cold sweat, and a few hours past midnight she heard the downstairs door open. She crept to the window and opened it slightly.

Mother stood in the front yard, dressed in her nightgown and rainboots, holding a rifle. Father held the boy by the scruff of his neck. He had been beaten badly, bruised and battered, with cuts on his body,

Lottie was too far away to hear what they were saying, but Mother didn’t look as angry as she did before. She appeared more purposeful, determined. She brought the gun to the boy’s forehead as he screamed and pleaded, his hands flailing wildly. Just as her finger pulled the trigger, he shoved the gun so it was in Mother’s direction, hitting her in the arm.

Mother wailed in pain as she collapsed to the ground. Lottie raced out of the room and ran downstairs, to see Father cradling Mother in the groomed green grass. In the distance, she saw the boy, running blindly.

After a moment, Lottie grabbed the gun, the metal cool against her hands. She chased after him. “Lottie,” Father called. “Lottie, come back!”

The boy turned around for a brief second, saw her chasing him, and ran faster. He was much quicker than Lottie with his lanky limbs and long strides, but he was getting tired. They passed the sculpture garden and the swimming pool, and when they reached the gate, he was wheezing.

As Lottie ventured towards him, he held out his hands, bloody and soiled black. “Lottie,” he said. “Lottie.” She pointed the gun, her hands quivering.

The gunshot rang out so loud Lottie had to cover her ears. She fell to the ground, shutting her eyes tightly as red splattered her. Mother scooped her up and Father stroked her hair, whispering that it was going to be alright. “We love you so much, princess,” Father said to her. “We love you so much.” And they kept murmuring that to her on the way back to the house, that they loved her so much, more than life itself, and that she did so well, and eventually Lottie drifted off to sleep.

The next morning when Lottie woke up, Mother told her that Father would be home soon, and that later they would all go and buy a new cat. “Any kind you’d like,” Mother said, readjusting the makeshift bandage around her arm. She still wore her nightgown, the front covered in dried blood.

Mother took her down to the cucumber gardens. Next to the trellis was a little sapling on a mound of freshly dug dirt. “So we can grow apples,” Mother explained. “We can make apple pie and tart, and you can climb the branches and play.” Lottie smiled and squeezed her Mother’s trembling hand. A strand of black thread lay tangled in the grass.

Zoe Nelms lives in New York City and is currently a sophomore at Avenues: The World School. She writes because she gets to essentially create her own world and manipulate reality, which you can’t normally do with anything else, as well as the fact that she can explore a multitude of emotions and experiences without having to experience them personally.