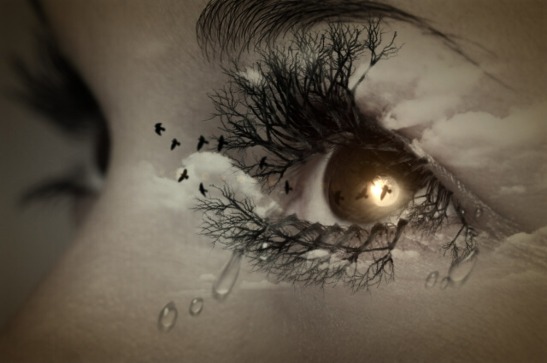 The girl with the moon kissed purple hair and the sun caressed pale, white skin. She’s been thrown in the loony bin for unspeakable acts upon herself.

She stays up until dawn watching the sun. The sun doesn’t look the way it does in coloring books.

She sits on the floor, looking at herself from the mirror that lays against the wall across from her. Nobody will love this hopeless little girl, she hates herself down to every last curl in her long hair. “She doesn’t belong,” she thinks.

Midnight dark skies stretching endlessly, resembling her farfetched dreams. There the moon sits on her throne. She stares like child, amazed by how she ruled the world.

It takes her a while to realize the moon is her.

She wears the crown.

She floats into nothingness, fading away into the stars, drenched in thunderous silence. She lets her mind wonder as her body does the same.

She is nothing. She will always be nothing.

She lets herself wander past Pluto, around Jupiter, and through Saturn’s rings in no specific order. She ventures until she brings herself to the beautiful moon. Paper houses, coated in vibrant poetry, graffiti, and stories, covered the surface of the moon.

She looks out across from the houses to see a star explode, turning it into colorful tie dye dust.

She lays in the thick, cold moon sand staring at all the gorgeous formations of the stars disintegrated into nothing but dust, but that soon changed.

They start to form what looks like a straight row, as if they are the spines of many, many corpses laid down and buried, only to rise from the filthy ground and merge into something so beautiful and pure.

She closes her eyes, imagined what it would be like to be one with the galaxy. To be a corpse.

She opens her eyes, she becomes breathless. A skull hovers over her paralyzed body. A skull from one of the armless, legless, headless spines in the sky. It starts to morph into this face.. A face she knows.. But from where..? Where does she know this face, where has she seen this warm, comforting face..

Before she can get a good grasp and figure it out it fades into the thin air.

W H Y did this happen?

The voices in her head scream, they sing this beautifully loud, torturous tune.

Why are you still here? Why? You are nothing.

She screams, trying to make it all stop. She screams over the voices, but they only grow louder..

The cold autumn wind hits her face, enabling her to breathe for a moment. She looks off the ledge of the long, steep cliff. She is so tempted to jump. All she wants to do is feel something, anything. She is suffocating enough as it is here in this wasteland of a world.

The harsh, dark water hits the side of the cliff and propels off, almost like an explosion. The water calls for her, so she jumps. She feels as if she is flying, as if she is falling but in reverse.

She plunges into the ocean, allowing the frigid black water to surround her and fill her lungs. She feels the icy arms wrap around her as if the water is shielding her from the death that she doesn’t know she is causing. As she sinks deeper, she feels the water squeezing tighter and tighter, as if she is afraid of losing her grip.

She doesn’t fight it, death, she knows what is going to happen. So she releases her grasp on life.

She is now one with her goddess, the beautiful ocean.

She lays in bed looking out the window. The night is calling out to her, she wants the girl to be a part of the beautiful landscape she has created. She sits up, removing the covers off of her body, then opening and slipping out of the window.

As she steps out onto the cold, wet grass, like magic, everything lights up as if it was all a kaleidoscope. The leaves that fell from the huge tree in the center of this place, now illuminated in beautiful reds, purples, oranges, yellows and golds, go in reverse. They rise from the ground and float ever so gently and gracefully back up to the branches that gave them all life at one point.

Then the gorgeous creatures and monsters emerge from the shadows and begin to come together and dance around the lifeless, yet so full of life, tree.

She slowly creeps towards them, and as she approaches them, they hold their furry but rough and matted hands with claws that extended as long as three, four, five inches out towards her, signaling for her to join in.

She locks her normal fingers with the fuzzy fingers of the abnormal creatures and begins to spin, twirl, and stomp the night away. And as they dance, the seconds, minutes, and hours fly by in the blink of an eye. Before they all know it the sun begins to rise over the horizon in blues, pinks, and oranges.

She turns and scurries back, climbing into her window and bed. She feels so ecstatic, she feels as if she could do anything now. From every black, wavy strand of her hair to her deep red, painted toenails, she is filled with this feeling of thrill.  She shuts the window, watching the creatures return to the shadows.

As the light hits the tree the colors evaporate into the sky, and the tree becomes dull once more.

She is resting, laying, floating away from this reality.

“I’m sorry I couldn’t take being in a cookie cutter society anymore. I’m tired of being a little wind up doll, and i’m tired of people playing pretend with my feelings,” she thinks.

Maybe they will understand now.

Maybe you will understand now.

Jayy Prather is a sixteen year old junior at Bryan Adams High School Leadership Academy in Dallas, TX. She was hand selected for a creative writing program and is developing a body of work through this class. She has also participated in after school readings such as the end of the year creative writing program exhibition and DaVerse Lounge and the Dallas Festival of Ideas.

An excerpt and announcement of this story’s place in the contest was also published here, on Hypertext Mag, the site that hosts this contest and sister site of Hypernova Lit.